I came across a really nice photo of Marilyn that I thought would make a good study.  At first, I was just gonna draw the figure and just rough out the face, not worrying about likeness. 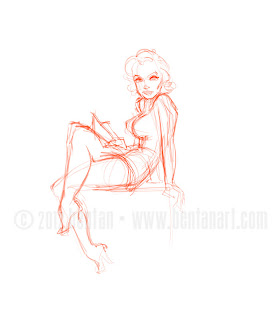 But then I couldn't resist at least trying.  As usual, I had all kinds of proportion problems.  Big head, especially. 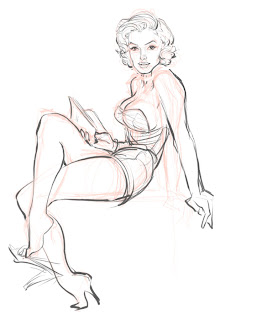 With the exception of the arm angle, the body was actually pretty easy.  But her likeness...oy.  That took a few hours.  Here are a few of the better heads.  This was a lot of tweaking, scaling, rotating, redrawing from scratch. 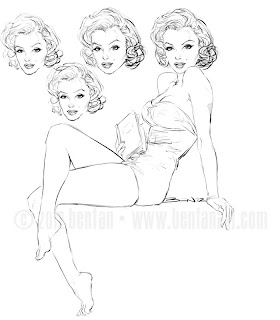 And the final lines.

One funny note here: the original reference photo was of a very young Marilyn, with more of a girlish face, but somehow I was not able to capture that and ended up with the more mature Marilyn, perhaps as I pushed it towards her canonical look. 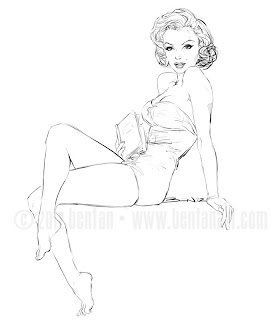 And at first I wasn't gonna bother coloring, but then I thought what the hell, I've come this far.  And this came together surprisingly quickly.  Probably less than an hour.  It's amazing how much having solid lines helps.  Plus, I'm finally finding Painter brushes that I like.

Normally I'd then spend another 8 hrs trying to refine it, but in this case, I think that'd be a mistake.  The rough colors work well enough.  Better to leave it alone. 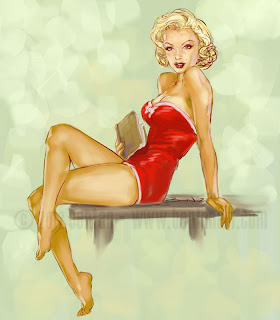