Please be mindful of beavers

Here's the latest bit of silliness.  This was a collaboration with LLToon.

He gave me this base pose and proportions: 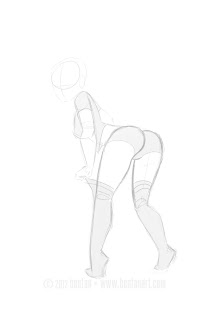 This is the first outline based on that.  I knew I wanted a creature, but didn't quite know what yet, nor what it looked like.  At first, the default was a bunny, then a Stitch-like alien, mostly I wanted someone gleefully doing something.  The beaver came out on top for obvious reasons of bad taste.  At this point I think I only had the beaver holding on to something...not sure what. 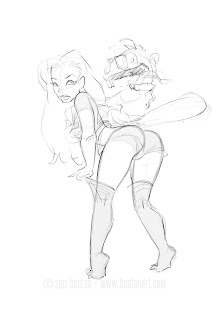 And then of course, it dawned on me: bra straps are like reins!  Here's the final pencils. 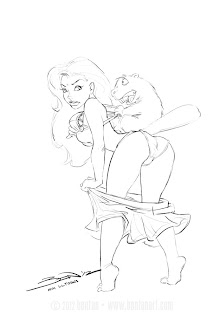 And the first finished colors.  It took a while to get the wording right.  I knew I wanted some kind of pseudo public service message.  At first the sign said "Please don't bring your beaver clothes shopping."  and "Keep animals wild.  Please dont' feed them."  But that seemed too direct and at the same time nonsensical.  After trying a number of different approaches, this one seemed most appropriate. 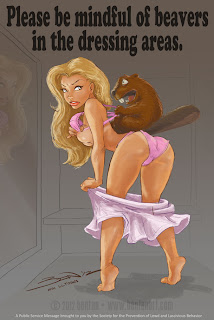 I thought I was done, but as usual, the small size brought out some issues that I wasn't quite aware of.  I had to tweak the contrast a bit to make the shapes pop a little more.  Also the black text was disappearing into the gray background. 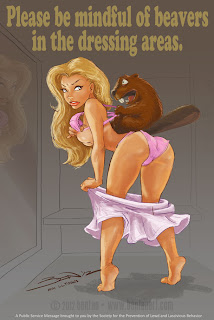 And one more color background variation: 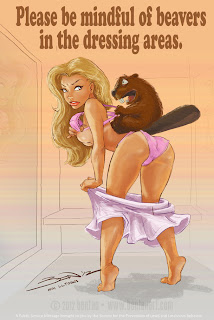 I was looking for something to draw the other day and Mike DeBalfo suggested drawing one of his Squirrel Girls.

After browsing through his characters on his DeviantArt site, Brisk Summers seemed to appeal to me most.  http://fav.me/d50bsho

Mike is the master of underboob, so it seemed appropriate to figure out how to get that element in there.  Brisk is supposed to be the most athletic of the bunch, so put the two together, and you have a stretching exercise gone voyeur.

At first I wasn't sure if the tail and ears were "real" or were fake, so I kind of drew the ears fake (because that's how he draws them) and the tail semi-real.  This sketch came relatively quickly. 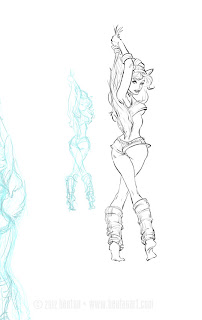 But the proportions were pretty bad: head was too big, torso too short, legs too skinny, and I had crazy problems with the eye.

So I spent some time in photoshop scaling pieces to they fit a little better.  And in my signature cheat: got rid of one eye. 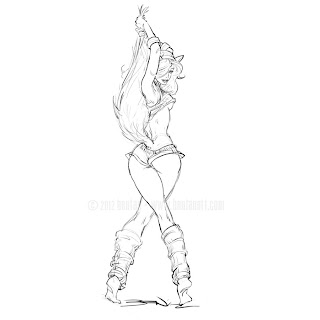 I was pretty happy at this point.  I was feeling pretty good about the tushie, but the overall piece felt a little too static.

So when I went to do the color, I rotated her just a tad to make her lean more.  I also rotated her upper torso to the left more to give her back and overall form more of a curve. 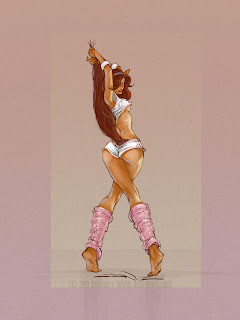 It looks a little better now, but the figure seemed too small.  She definitely looked better large.  Though this might have partly a function of the big fat pencil I was using.  Chris Gutierrez suggested  a tighter crop, so I did that and leaned her even more. 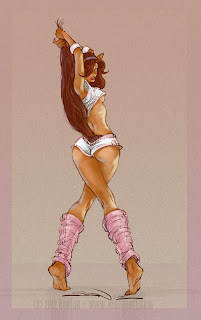 I *thought* I was done, but after letting it sit a day, I found that the leggings were really bothering me.  I tried cropping it right at where her legs crossed but that didn't feel right.  So I leaned her some more, cleaned up the leggings so they didn't grab your attention so  much, curved out the tail a little, and gave her more padding at the top (to better match Mike's character).

Overall I'm pretty happy with it.  I think my favorite bit is the highlights on her tush. 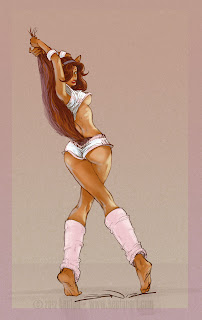